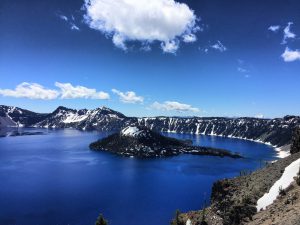 Last September we gave you a riddle as a hint about where the Classic would be heading this year. After Kickoff several people came up to us asking how you can possibly get Crater Lake from that bunch of crazy cryptic clues. Well, allow us to break it down for you piece by piece:

It all starts with the creation story of Crater Lake. The spirit of the mountain was called Chief of the Below World (Llao). The spirit of the sky was called Chief of the Above World (Skell). Sometimes Llao came up from his home inside the earth and stood on top of Mount Mazama, one of the highest mountains in the region. During one of these visits, he saw the Makalak chief’s beautiful daughter and fell in love with her. He promised her eternal life if she would return with him to his lodge below the mountain. When she refused, he became angry and declared that he would destroy her people with fire. In his rage, he rushed up through the opening of his mountain and stood on top of it and began to hurl fire down upon them. The mighty Skell took pity on the people and stood atop Mount Shasta to defend them. From their mountaintops, the two chiefs waged a furious battle. They hurled red hot rocks as large as hills. They made the earth tremble and caused great landslides of fire. The people fled in terror to the waters of Klamath Lake. Two holy men offered to sacrifice themselves by jumping into the pit of fire on top of Llao’s mountain. Skell was moved by their bravery and drove Llao back into Mount Mazama. When the sun rose next, the great mountain was gone. It had fallen in on Llao. All that remained was a large hole. Rain fell in torrents, filling the hole with water. This is now called Crater Lake 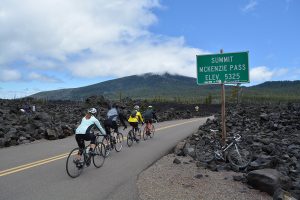 A Native’s trail,
The McKenzie Pass summit, named for the McKenzie River, is located on the scenic McKenzie Pass Highway (Route 242) just west of the Dee Wright Observatory. Until the 1860s, the pass was a Native American trail that was later used for driving cattle over the Cascades.

A forest lives on without fail.
Aufderheide Scenic Byway – During his career, Robert Aufderheide was instrumental in helping the Forest Service complete the transition from custodial management to professional intensive forest management under multiple-use principles (Multiple-use refers to the management of land or forests for more than one purpose and oftentimes combines two or more objectives for land use while preserving the long-term yield of wood and non-wood products)