Today was scheduled to be Joyride, our annual one-day event where women ride, connect, and enjoy the delicious food and drinks from the charming town of Independence, Oregon and Polk County. Though we’re all a little more accustomed to life with increased social distancing, it’s hard not to think about the joy we would find in riding together on the summer solstice. We miss riding with you.

But we cannot let this date pass by without celebrating women on bikes even if it just means doing it digitally. Social media can inspire and probably no other platform does it better than Instagram. Through that tiny square we are transported to high mountain passes, tucked into fast rolling country roads, and sharing snacks at city cafes and roadside mini-marts with our best crew. Instagram captures the essence of those singular moments from a great ride that stay with us forever. And when we see someone else’s moment, we are encouraged to get in the saddle and chase our own. Here’s a selection of riders, writers, artists, and friends from Oregon & beyond whose squares inspire us every day. Please give them all a follow.

Clara Honsinger / @clarahonsinger – Clara is a native of Ashland, Oregon currently attending Oregon State University where she is studying towards a degree in nutrition. She is the current USA Cycling Cyclocross National Champion, a former US Collegiate, U23 National, and Pan-Am Champion, and placed second at a World Cup Cyclocross event in 2019 racing against the world’s best. She credits Oregon weather and the state’s cyclocross scene for preparing her to race in similar conditions in The Netherlands and Belgium each winter. Stay tuned, imagine what she’ll do on a bike once she’s done taking classes and studying for finals during ‘cross season!

Lisa Congdon /  @lisacongdon – Lisa is an internationally celebrated illustrator and author who lives in Portland. (Her studio is just a few blocks away from the Cycle Oregon office, by the way.) She is known for a colorful graphic style and a bold hand lettering style. She has authored 8 books and worked in collaboration with brands from fashion to homewares to education. Lisa has ridden Joyride with us before and you’ll find cycling posts mixed in with her art regularly.  She has a wonderful collection of online classes and resources for adults and kids looking to improve their drawing skills or just to have fun.

Keyonda McQuarters / @_in_his_image – Keyonda is a leader of the Portland chapter of Black Girls Do Bike (@blackgirlsdobike), a national nonprofit supporting a community of women of color who share a passion for cycling. She, too, has pedaled with us at Joyride and told us at a community ride last week how much she’d be missing it this year. We’ll miss seeing you there, too, Keyonda. But about that ride, she and fellow organizer Nichole Watson thought a community ride would be good for lifting some spirits beyond just their own. What they hoped would be a few dozen people became a ride like no other seen before in Portland with over 2000 riders joining in. Keyonda’s mission is to be the liaison bringing new riders past the barriers to entry into cycling and making the bike an accessible tool for women as recreation, transportation, and empowerment.  You can read more in a great feature story about her from Willamette Week.

Serena Bishop Gordon / @serenabg – Serena calls Bend, Oregon her hometown and it’s a perfect place to be from when you’re a professional cyclist. She rides for Liv Cycling, also the team of Ayesha McGown who you’ll read about below, and specializes in off-road disciplines.She is that special kind of rider who also serves as a coach to others currently in the racing scene with her. And on top of that she works with companies to deliver communications related to environmental sustainability and corporate responsibility.

Linda English / @dirtyfreehub – Linda, aka Gravel Girl, also calls Bend, Oregon home and is the co-founder of the DirtyFreehub.com website. What began as a personal blog is now a comprehensive list to many of the best gravel riding routes in 8 western United States and Tasmania. Leading a team of fellow enthusiasts, Linda curates routes with detailed maps, photos, cue sheets, and the “adventuresome and scenic” qualities that deliver a rating 5-Stars. Regular readers of the Cycle Oregon blog will recognize Linda as the author of the popular   “Adventures of Gravel Girl” post. She has brought the joy of gravel riding through her writing including the recent Gravel Riding: A Good Option During the Pandemic in the Bend Bulletin.

Anne-Marije Rook /  @amrook – Anne-Marije has traveled the globe as a cycling journalist but the native of The Netherlands now calls Portland, Oregon home. Her writing on the subject and sport of cycling has appeared in VeloNews, CyclingNews, Rouleur, and was the founding editor of Ella Cycling Tips. She records podcasts and has worked as a producer for the UCI YouTube Channel. One of our favorite stories from Anne-Marije is a feature on Brenna Wrye-Simpson, the first female mechanic on the World Cup scene. (Brenna is the mechanic for Clara Honsinger and also a Portland, OR resident.)

Ayleen Crotty / @filmedbybike – Ayleen is a person, yes, but we’ve chosen the Filmed By Bike account as “hers”. She is the Festival Director for the Portland-based touring festival of the world’s best bike movies. Now in it’s 18th year, on a break just like we are, Ayleen brings Filmed By Bike to locations throughout the United States, Canada, England, Ireland, Norway, Denmark, and Hong Kong. She calls herself simply a “storyteller” but what she really does is thread cycling culture into the everyday life of communities all over the world.

Ayesha McGowan / @ayesuppose – Ayesha is a former pre-school music teacher who got on a bike as a commuter in college and ultimately decided to become the first African-American female professional cyclist-  A seemingly simple dream with a complicated journey. She lives in Decatur, Georgia though the pro cycling circuit means her bag is almost always packed and her tires are on a road far from home. Ayesha has faced a difficult journey to become a pro at the sport we love though she has this to say about it all, “Cycling is a unifier, we all enjoy bikes. I want to encourage an idea of unity.”

Gloria Liu / @thats_my_line –  Gloria is the current features editor for Outside magazine and a former features and gear editor for Bicycling magazine. She lives in Boulder, Colorado and rides everything from road to mountain to gravel. She’s edited numerous gear guides and knows as much about the best flannel shirt for off-road riding as she does about the best saddle for your road bike. She writes about more than just bike equipment, though, and her stories on grief, loss, and love in cycling stand out as examples of how bike rides can be more than just exercise. Gloria also reminds us that the oddballs and outliers in cycling are the ones we cannot do without. What we’re saying is that we wished she lived in Oregon so we could ride with her more often. We are fans of Metal, her cat, too.

Selene Yeager /  @fitchick3 – Selene has done so much and written about even more that we don’t know where to begin in describing her. How about this from her Instagram bio, “Lover of 2 wheels”. Sounds great to us. She is the author of numerous books including the all-new Bicycling Magazine’s Gravel! along with countless feature stories for bicycling and health & fitness titles. She’s a licensed professional mountain biker, a certified trainer and coach, and an All-American Ironman triathlete. Her account will inspire you with two-wheeled exploits around her home in Emmaus, Pennsylvania and wherever a gravel event start line is drawn.

Thanks for reading and following, (remember to follow Cycle Oregon on Instagram, too!), we’ll see you at Joyride 2021! 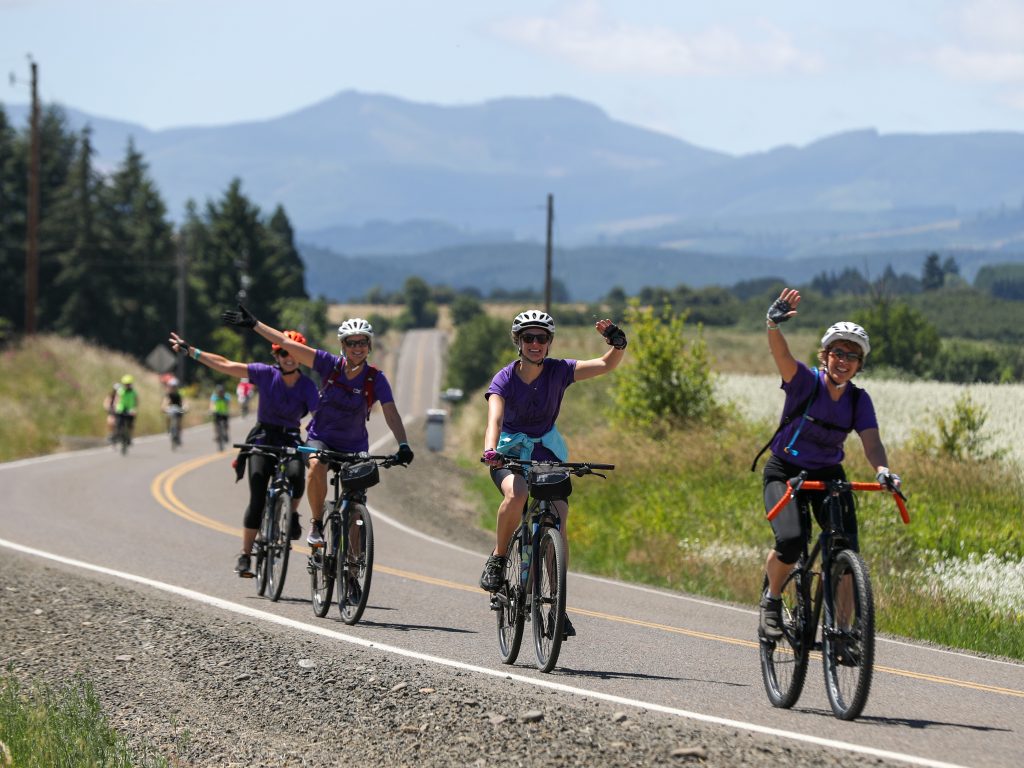