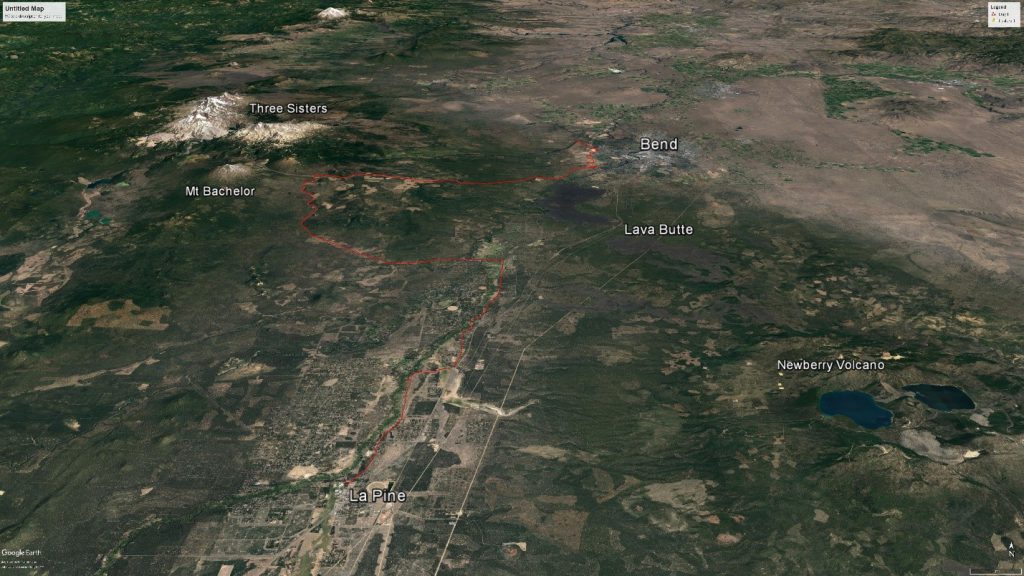 Our ride today starts in the sagebrush and Juniper forests of the central Oregon high desert. For the first dozen miles we will skirt the western edge of Bend, across a broad plateau that slopes gently to the east and is interrupted by small canyons coming down from the High Cascades to our west. This plateau is made of a mix of river sediment,  glacial deposits and lava flowing off the Cascades. Under these young rocks are older layers of volcanic ash and pumice. The terrain is subdued, so we won’t see much in the way of rocks. We also won’t see a series of faults underneath our tires (Figure 2).  Although they won’t be obvious when we cross them, these faults show up as straight steps in the land surface that run for miles across the plateau. Part of the Tumalo fault zone, they have probably been active in the last 10,000 to 20,000 years, and may pose a significant seismic threat to Bend and nearby communities.

Pumice was mined at several sites along this part of the route, but the mines have been closed and in many cases reclaimed for suburban development. Most pumice is used for making lightweight concrete, like the familiar cinder block. 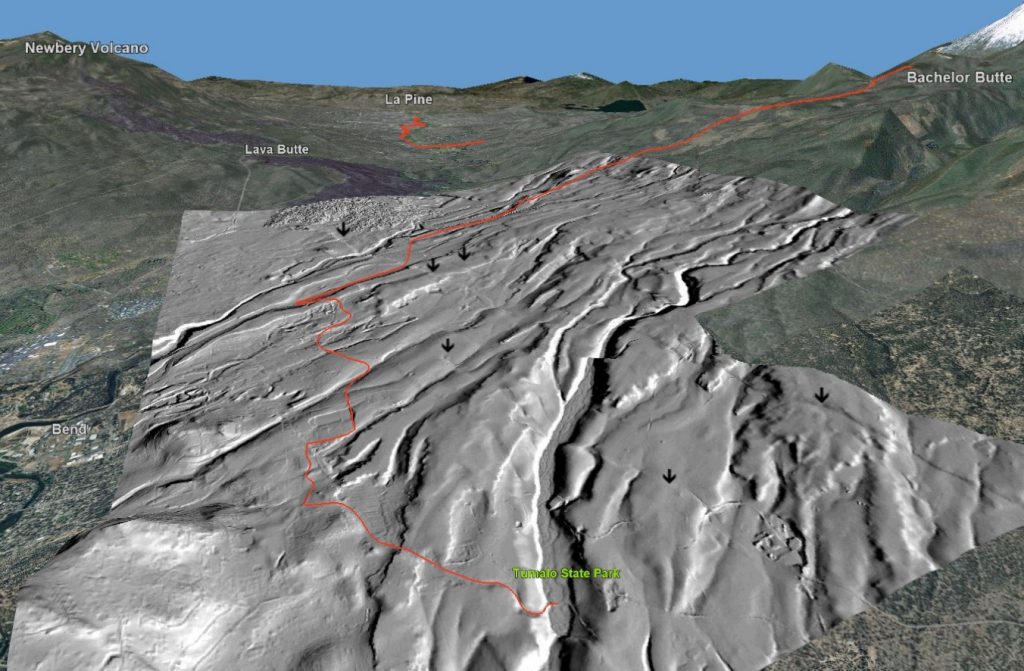 Figure 2. Faults of the Tumalo fault zone break up the plateau we cross in the morning. The black arrows point to three of the more prominent faults visible on this lidar image.

We will turn west and begin the climb up the Cascade lakes Highway towards the High Cascades and Mt. Bachelor. The forest will start to change to huge, red-barked Ponderosa pines as we climb, which eventually give way to scrawny lodgepole pines as we near Mt. Bachelor. We will get great view of Mt. Bachelor as we ride, though at this time of year it may be a dull brown cone with only a few hints of the snow cover that makes it such a great winter sport destination. Mt. Bachelor is a 9,068 ft high stratovolcano, composed of layers of volcanic cinder and lava. The mountains original cone shape is well preserved, because it was formed about 9,500 years ago, after the last major glaciation, and has seen little glacial erosion. The eruptions that formed Mt. Bachelor were part of a larger rift eruption; a series of volcanic vents that formed along a 15 mile-long fault. If we strip away the forest with lidar imagery (Figure 3) you can easily see the dozens of small cinder cones that make up this chain of craters. These eruptions build cinder cones by spraying fluid lava in the air, which freezes into small bits and falls back to pile up in a cone. More fluid lava wells up out of the rift and flows across the landscape, leaving intricate multi-lobed flows.

Figure 3. Lidar imagery looking to the NE along the chain of craters that form the Mt. Bachelor rift. In addition to the numerous small cinder cones, you can see the highly irregular surface of the lava flows that came from the rift.

After we turn onto Forest Road 45 we will descend along the edge of the young flows from the Bachelor rift, but the forest will obscure most of the geology. We will see a nice cinder cone on our right shortly after we make the turn. As we arrive in the Sunriver area, we will cross the Deschutes River and then turn right to ride up the Little Deschutes River. The climb will be very gentle, because the valley here is very flat, as a result, the rivers form contorted looping meanders (Figure 4). The reason that the valley floor here is so flat is that 6,000 years ago, an eruption at Lava Butte (Figure 5) blocked the Deschutes river, forming a series of falls and cascades, and causing the valley upstream to fill in with sediment, which in turn made the rivers meander. The cinder cone at the vent for the Lava Butte flow has a great visitor center and opportunities for hikes around the cone and flow. 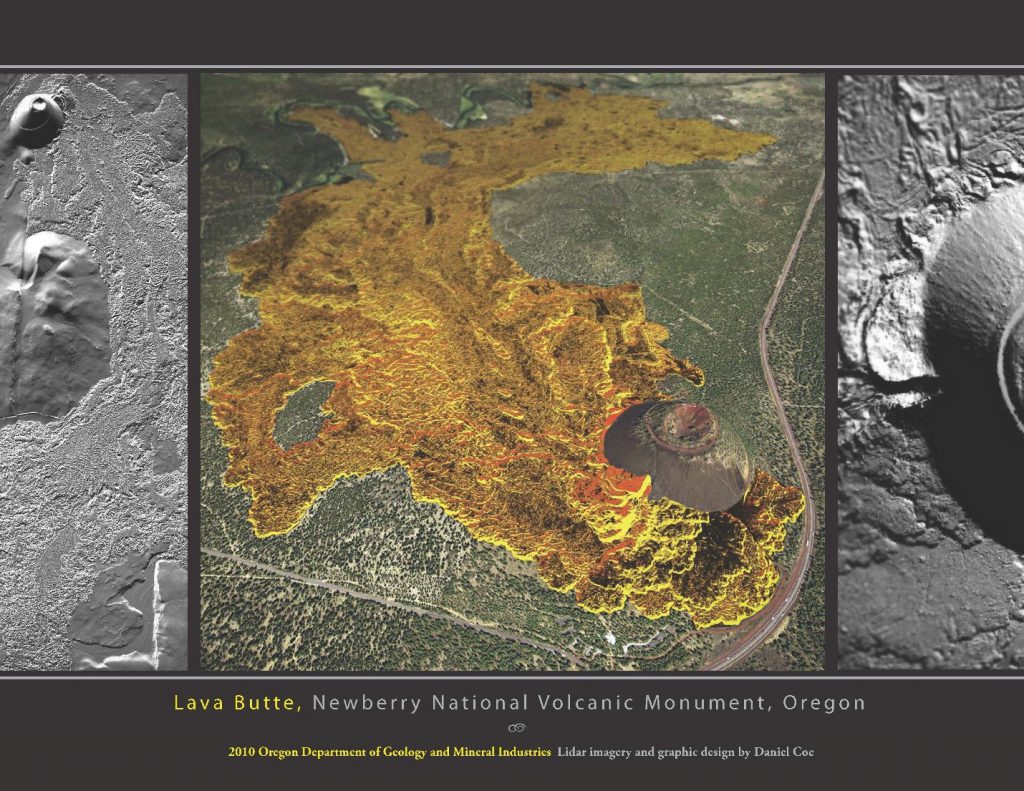 As we ride up the Little Deschutes River to La Pine, the low forested mountain on our left is Newberry Volcano. Newberry is the largest active volcano in the Cascades, but has a very different character than the more familiar snow capped cones like Mt. Bachelor or Mt. Hood. Mt. Hood rises 7000 feet above the surrounding terrain, and has a footprint of about 75 square miles; Newberry stands only 3,400 feet above the surrounding terrain, but covers an area of over 500 square miles. Newberry is a shield volcano, which is formed by eruptions of very fluid basalt lava. The lava flows so easily that it spreads our rapidly and doesn’t build a steep cone like most of the Cascade volcanoes. One lava flow from Newberry traveled over 40 miles to reach the Crooked River north of Bend.

The caldera of Newberry volcano is a fascinating place (Figure 6) and is worth a visit on a future trip (the ride up into the caldera is a great climb). The caldera formed in explosive eruptions about 75,000 years ago, and is filled with two beautiful lakes and many cool volcanic features. The Big Obsidian Flow erupted only 1,300 years ago, and the central Pumice Cone (Figure 7) looks like something out of Mordor. The floor of the caldera is littered with steam explosion pits formed by the heat from the magma that lies near the surface, and both lakes have hot springs in their beds. An exploratory geothermal well in the caldera encountered temperatures of 500 degrees at a depth of 3000 feet, and exploration for geothermal energy continues today on the flanks of the volcano. 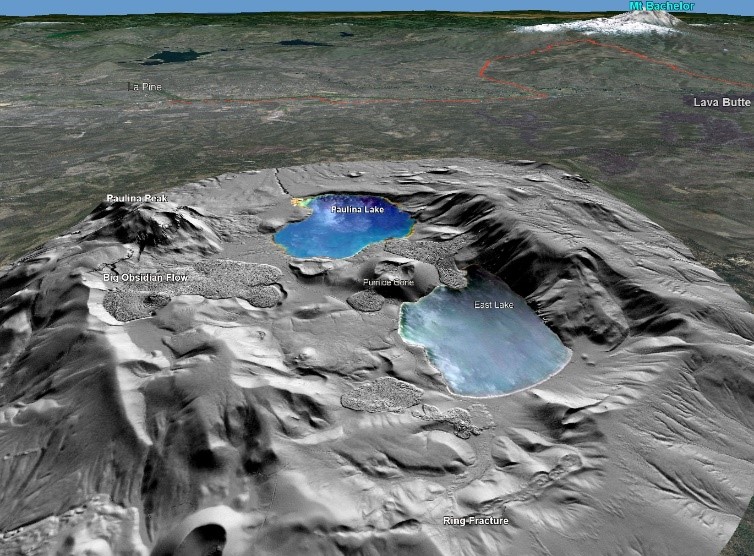 Figure 6. Perspective view to the West across Newberry caldera. Several young lava flows are obvious, like the Big Obsidian Flow, and all were the result of eruption of thick pasty lava, resulting in a “cow pie” appearance. The cinder cone just visible at the lower left is one of dozens that dot the flanks of this huge volcano. The curved ring fracture at the bottom of the image is part of the fracture system that formed when the caldera collapsed during a major eruption 75,000 years ago. You can see a where a small lava flow erupted from the fracture right above the word “Ring”, and flowed down into the caldera floor. 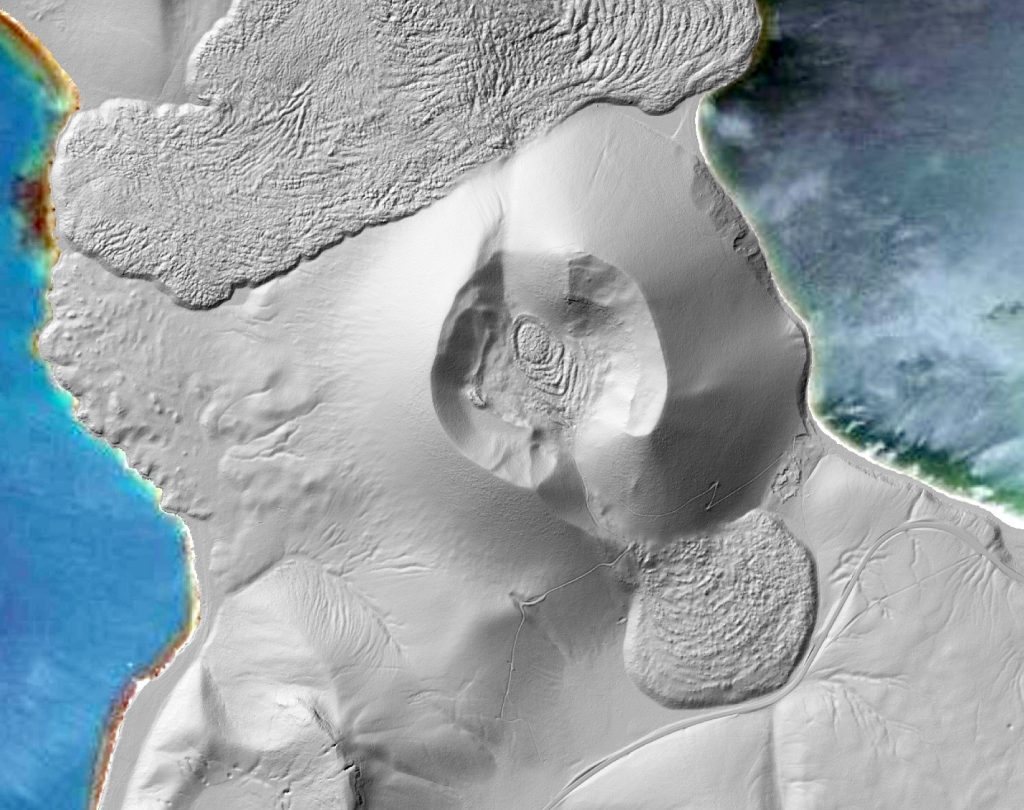 Figure 7. The central Pumice Cone in Newberry caldera. After building a cone of pumice fragments during the beginning of the eruption, this vent squeezed out pasty lava which dribbled out of the side of the cone, and left a mysterious eye in the center of the cone. Steam explosion pits are visible in the lower left corner of the image.