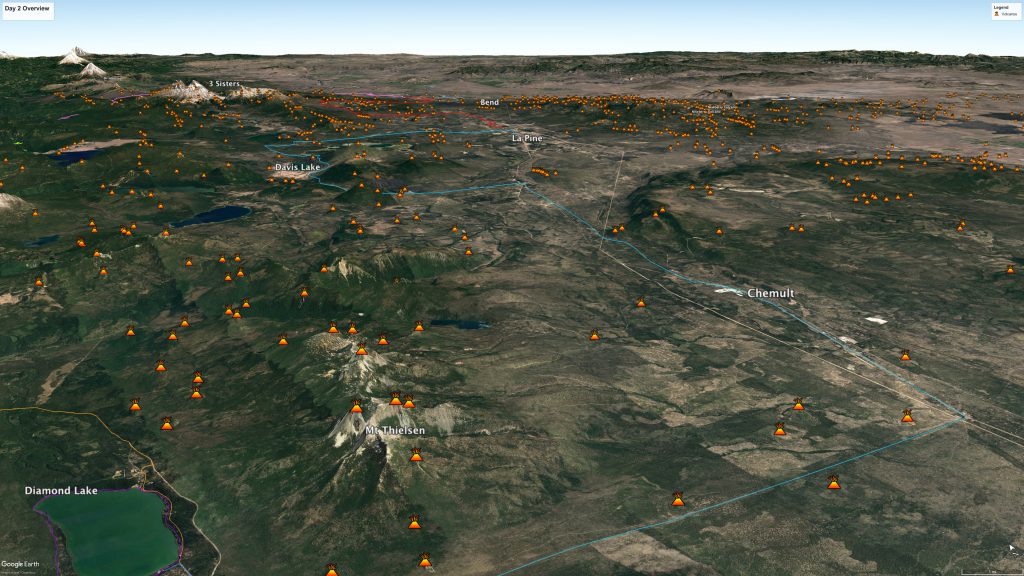 Figure 1. Our rides on Day 1 and 2 goes through one of the highest concentrations of volcanic vents anywhere. The orange icons mark the locations of young volcanoes.

Today’s ride takes us through part of the Cascades Lakes region before settling in for some long straight slogs down Highway 97 and west to Diamond Lake. Like Day 1, the area we are riding through has a huge concentration of young volcanoes, ranging in size from a cinder cone a few hundred feet across to the 9,000-ft high cone of Mt. Bachelor (Figure 1). In fact, on Day 1 we passed within five miles of 124 young volcanoes, and today we will pass another 101. These volcanoes come in a wide variety shapes and sizes and erupt a wide range of materials; lava, cinders, pumice and ash. The way in which a volcano erupts depends on the chemical composition of the molten rock, or magma, that is rising to the surface. Most volcanic rocks contain iron, aluminum, magnesium, sodium, calcium, titanium, and loads of silica, a compound made up of silicon and oxygen. Although silica is always the most abundant material in volcanic rocks, the amount varies quite a bit. At one end of the range is basalt, which is about half silica. Because of the low silica, basalt erupts at nearly 2,200 degrees F and is very fluid. Rhyolite, at the other end of the range is nearly three quarters silica, and is relatively cool (about 1,200 F) and very stiff and sticky when it erupts. This difference in the fluidity of lava makes all the difference in how it erupts.

All magma contains dissolved gasses like water vapor, carbon dioxide and sulfur dioxide. As magma rises near the surface, this highly compressed gas begins to bubble out of the magma. If the magma is basalt, the lava is so fluid when it reaches the surface that the gasses easily escape, often casting spectacular lava fountains. The fountain lava freezes in the air into small bits, called cinders, which rain down and build a cone around the vent. When there is less gas, the basalt lava flows freely away from the vent, behaving almost like water as it flows for many miles. If the magma is rhyolite, huge pressure can build up in the lava as it reached the surface with the gas still trapped in the sticky molten rock. That often leads to spectacular explosions, as all of the gas suddenly expands, ripping the lava body to shreds and blowing it miles in the sky. The gas bubbles in the hot lava expand as the fragments fly through the air, and then freeze into pumice. Magma that falls between these two extremes has a range of eruption styles and we will see many along the way. 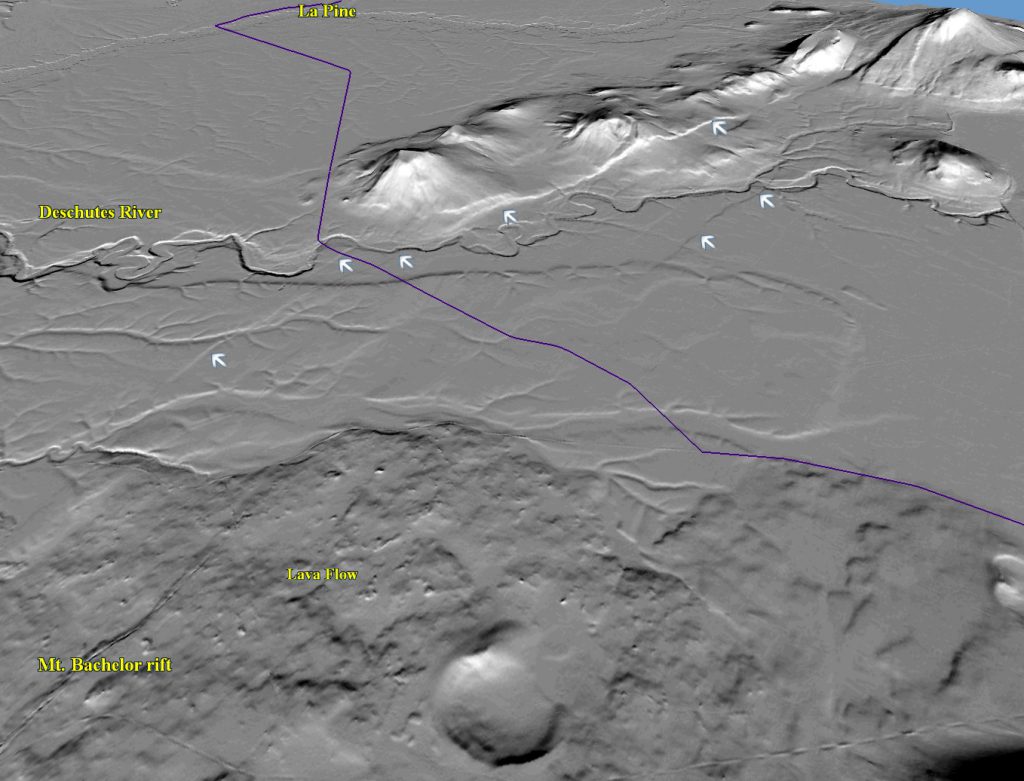 Figure 2. Young faults are visible in this Lidar image, and our route crosses two of them. The Lidar image has been tweaked to enhance the visibility of the fault; we probably won’t notice them, because they are subtle steps in the land surface a few feet high.

As we leave La Pine and head west, we will cross another series of active faults (Figure 2) about 10 miles into the day. This group is part of the La Pine graben, which is a geologic structure that is formed when an area of land subsides between sets of parallel faults, and occurs when the landscape is being stretched. We will also pass by the southern end of the Mt. Bachelor rift, which probably extends beneath our route but is buried by young sediments deposited by the Deschutes River.

We will make a big turn to the south near the Twin Lakes, which have an unusual origin. Natural lakes almost always point to very young and active geology. Lakes fill up with sediment rapidly, so it typically takes some sort of very powerful or rapid geologic process to create one that we see today. Most natural lakes in Oregon were formed when glaciers dug holes in bedrock, or left dams of glacial rubble. The Twin Lakes (Figure 3) have a much more exciting and unusual origin. They are maars, which are volcanic vents that form when rapidly rising magma encounters groundwater very close to the surface. The intense heat causes the water to flash into steam, producing an explosion and leaving behind a crater that fills with water. 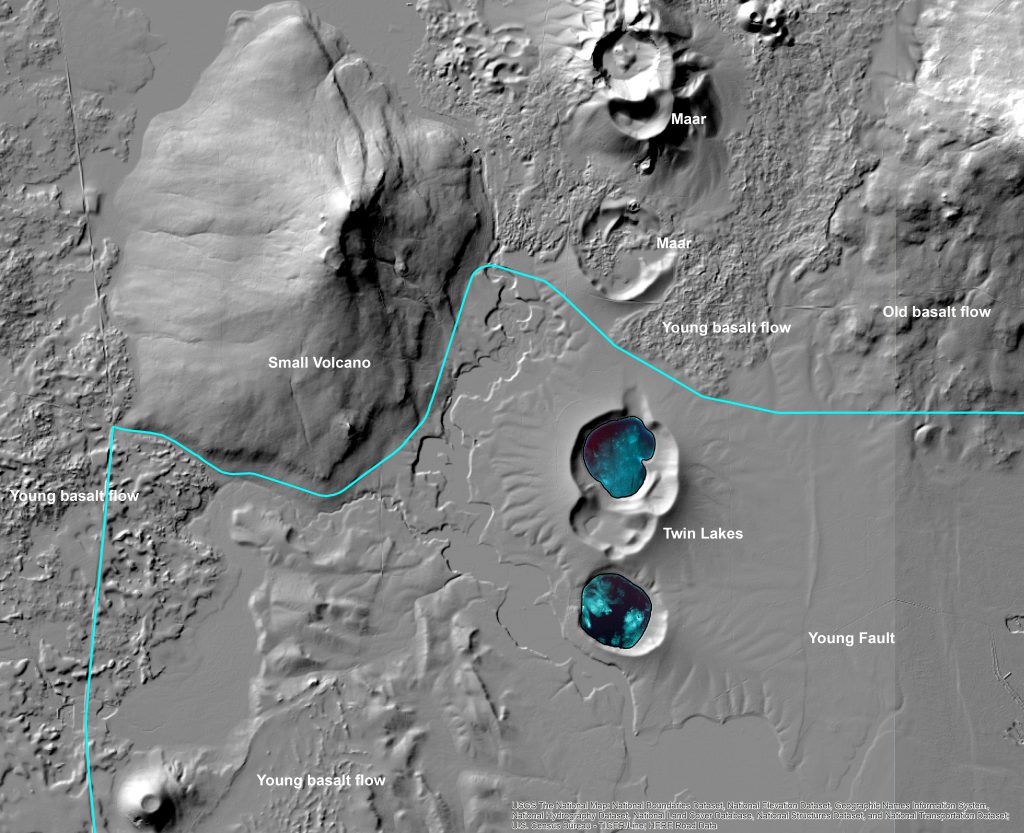 Figure 3. The twin lakes are part of a chain of maars, craters formed by eruptions that mix hot magma and groundwater to make explosions driven by steam and volcanic gasses.

As we turn south past the Twin Lakes, we will cross the Deschutes River, and then in a few miles we will cross over Odell Creek. If you look to the right as you cross the bridge, you will notice that the creek seems to end abruptly at a wall of dark gray lava. This is the Davis Lake andesite flow which erupted about 5,000 years ago Andesite is a lava type that is intermediate between basalt and rhyolite. In this case the lava flowed, but was sticky enough that it built up in a series of lobes right around the vent (Figure 4). The lava flows slowly enough that a crust of solid rock several feet thick develops, which is then broken as the molten material beneath continues to move. This type of lava flow is called an aa flow, and leaves the surface of the flow a chaotic jumble of sharp jagged blocks. Much of the surface of the flow is still bare lava, and in the last 5,000 years vegetation has only found a foothold on the smoother surfaces of cinder cones near the center. Walking across the surface of an aa flow is very difficult and hazardous. Don’t try in your bike shoes!

We will ride along the edge of the flow, and arrive at Davis Lake, which is another example of a volcanic lake. In this case the lava flow blocked Odell creek forming a huge natural dam. An aa flow is typically very porous, so the lake actually drains through the flow, emerging on the north side as a large spring. 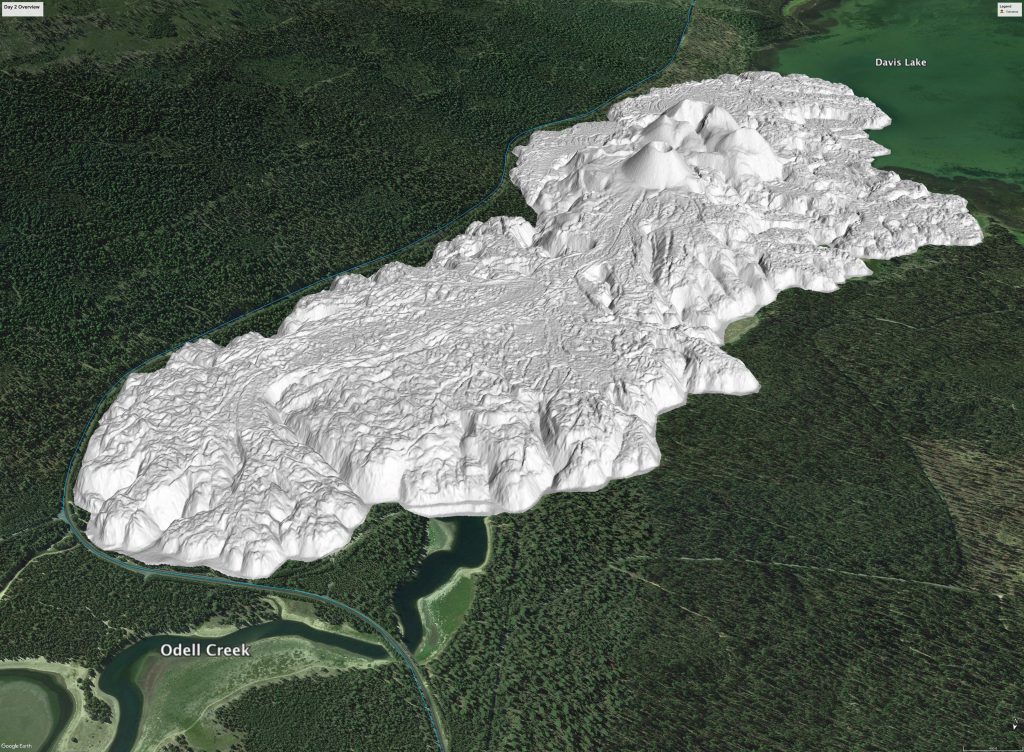 Figure 4. The Davis Lake lava flow forms a natural dam that impounds Odell Creek to form Davis Lake. The creek emerges as a giant spring on the downstream side of the dam.

About 8 miles past Davis Lake we may see another young lava flow about a mile to our left, and then another mile along we will pass right by a similar flow. Both of these lava flows, the Black Rock and Black Rock Butte flow, are also about 5,000 years old. 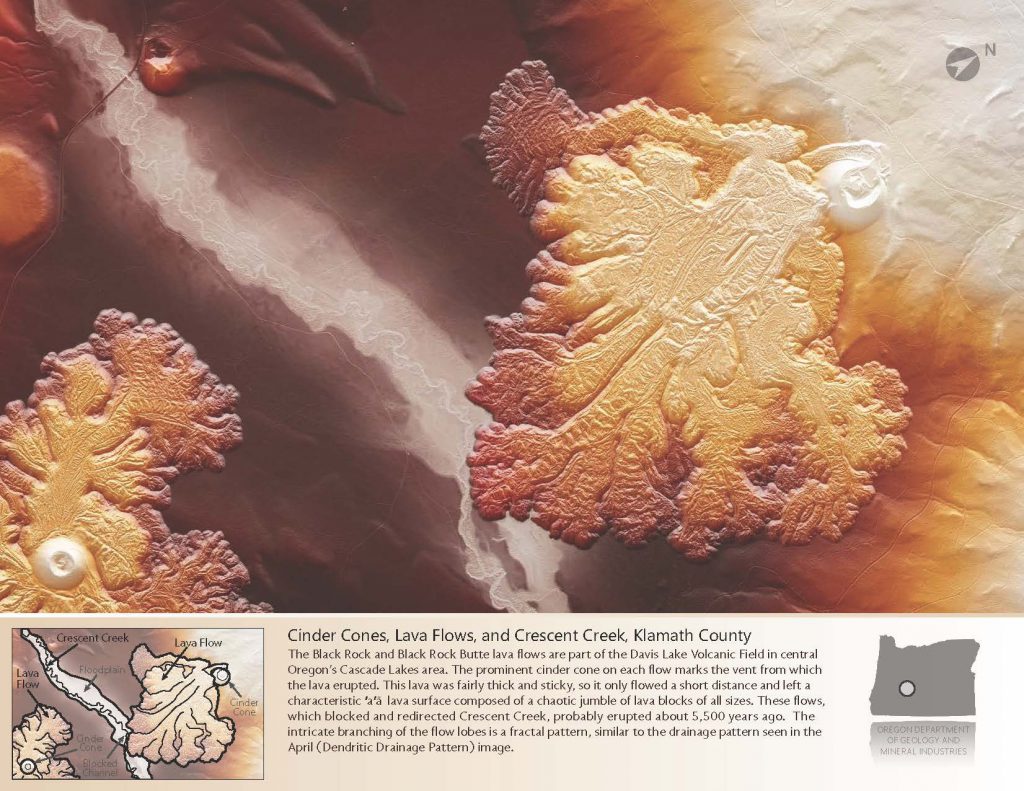 We soon reach Highway 97 and turn south, and from here the geology is much harder to see. The landscape is very flat and forested, and affords few views. As we leave Chemult we will pass a roadcut 10-20 ft high in which you will see bright white rock fragments of many sizes. This is pumice that came from an explosive rhyolite-type eruption about 7,700 years ago. You will continue to see this white pumice material, sometimes yellowish, from here all the way to camp.

About 1.5 miles after we turn onto Highway 138 and begin the long, slow climb up to the pass, you may see a small red cone off to your right. This is one of many small basalt cinder cones in the area. These cones are a common source of gravel and sand that is used to spread on the highways in icy conditions. The cinders are usually loose and easy to dig, and can be easily crushed or separated into the right size for road sanding. Enjoy the sight, because the next 10 miles are one of the longest and most monotonous straightaways you will ever see.

As we near the pass, you may be able to see Mt. Thielsen on your right through the trees. This is another major Cascade volcano that is 9,184 ft high. Eruptive activity ceased here about 250,000 years ago, and what must once have been a very impressive mountain has been ground to a sharp point by several periods of glaciation. 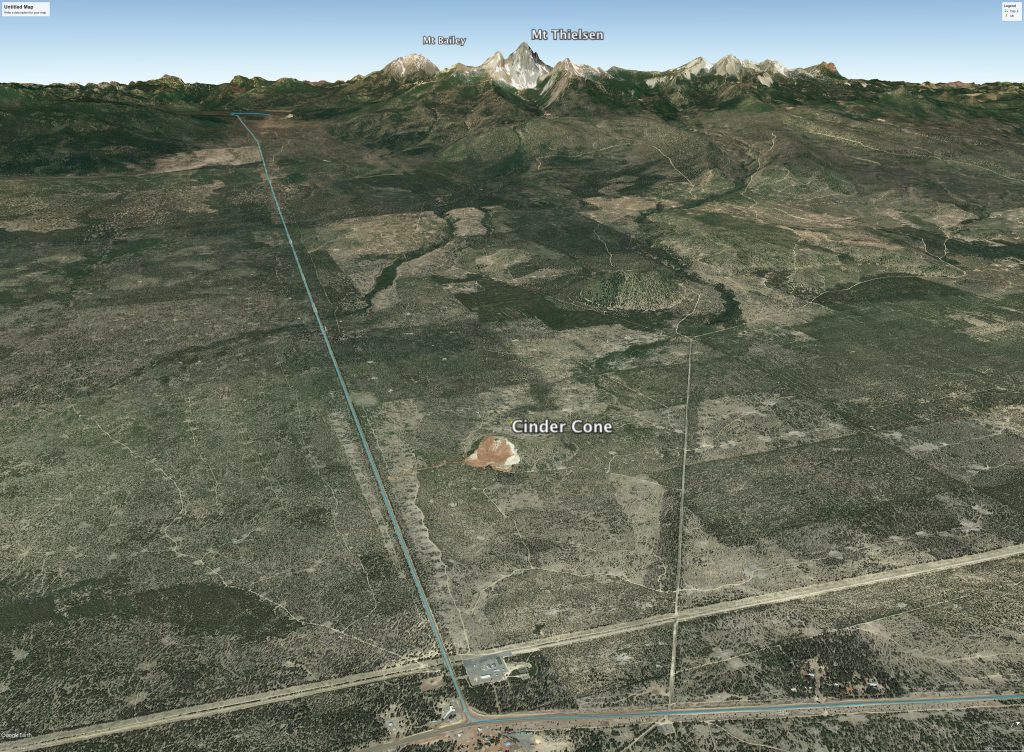 Figure 6. A view to the west along the long straight stretch of Hwy 138. The road is absolutely straight for the first 10.5 miles. Diamond Lake is in the valley between Mt. Bailey and Mt. Thielsen.