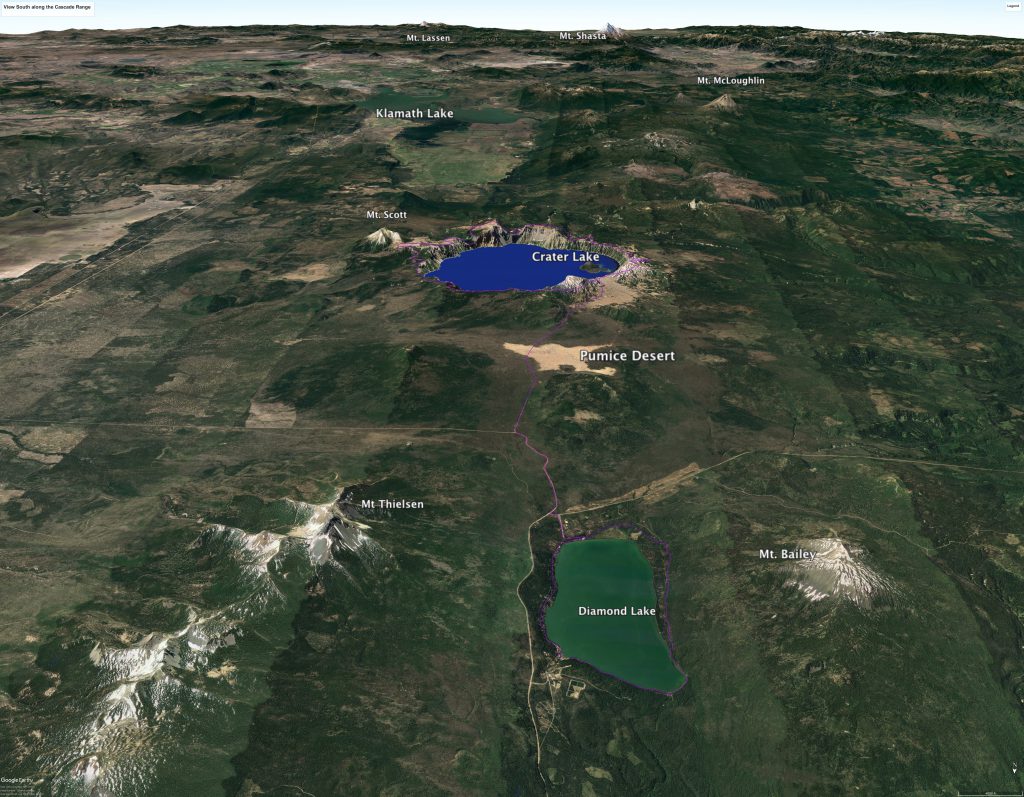 Figure 1: The view south shows our route around Crater Lake, which occupies the stump of Mt. Mazama. The Cascade volcano chain extends south from Crater Lake, and includes Mt. McLoughlin in Oregon and Mt. Shasta and Mt. Lassen in California. Klamath Lake, located southwest of Crater Lake, occupies a graben; a much larger version of the one we passed through leaving La Pine.

Today you can choose a leisurely ride through the forest around Diamond Lake or a strenuous ride around the spectacular Crater Lake (or I suppose some of you will do both). Either way you are in for a great day!

Crater Lake formed during a cataclysmic eruption of Mt. Mazama, one of about a dozen large active volcanos in the Cascade chain. Mt.Mazama had a long eruptive history, and probably looked like Mt. Hood or Mt. Rainier; a snow-capped cone carved by deep glacial valleys. Simply projecting the lower slopes of the mountain upwards suggests that Mt. Mazama was 12,000 to 14,000 feet tall (Figure 2). 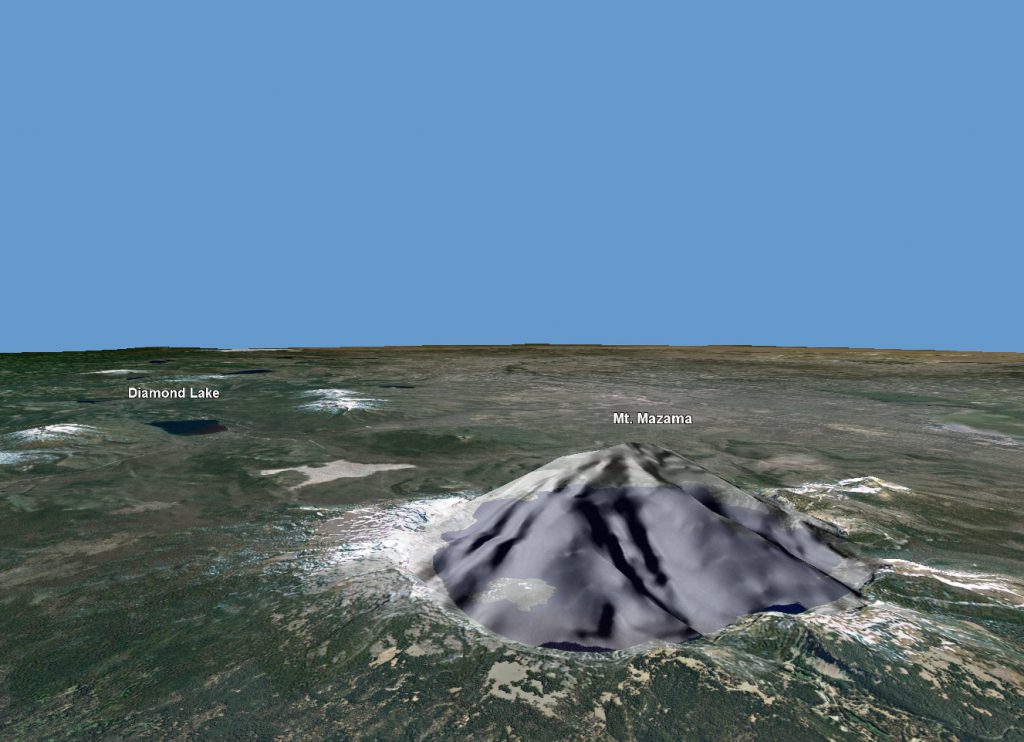 Figure 2: The Ghost of Mt Mazama. This image shows a reconstruction of the Mazama volcano before the Crater Lake eruption. Extending the remaining slopes and valleys upwards points to a mountain 12,000-14,000 feet high, which would have been laced with large glaciers. All of the “ghost” mountain was blasted into the sky or collapsed into the empty magma chamber during the cataclysmic eruption 7,700 years ago.

About 7,700 years ago, the depths of Mt. Mazama were filled with huge amounts of hot silica-rich lava. When something, perhaps an earthquake, triggered the eruption, the gas-rich magma began to reach the surface where the reduced pressure caused it to expand into red-hot foam. The explosive increase in volume caused the magma to be ejected as cloud of expanding shattered pumice fragments and ash. The eruption decompressed deeper levels of magma, causing the foaming to accelerate and resulting in a massive column of hot gas, pumice and ash, which rose into the stratosphere. Larger fragments of pumice rained down for miles around the volcano, while ash was transported as much as 800 miles away. In the most intense part of the eruption, the ash and pumice was falling so thick around the vent that it coalesced into flowing rivers of red hot fragments and gas; called a glowing avalanche or ash flow. These flows swept across the landscape at highway speeds, obliterating everything in their path. When they came to rest they were hot enough that the deeper parts fused in to a hard dense rock called a welded tuff. This materials fills many of the valleys around the mountain, and erodes with characteristic steep gullies, often producing hoodoos and pinnacles. 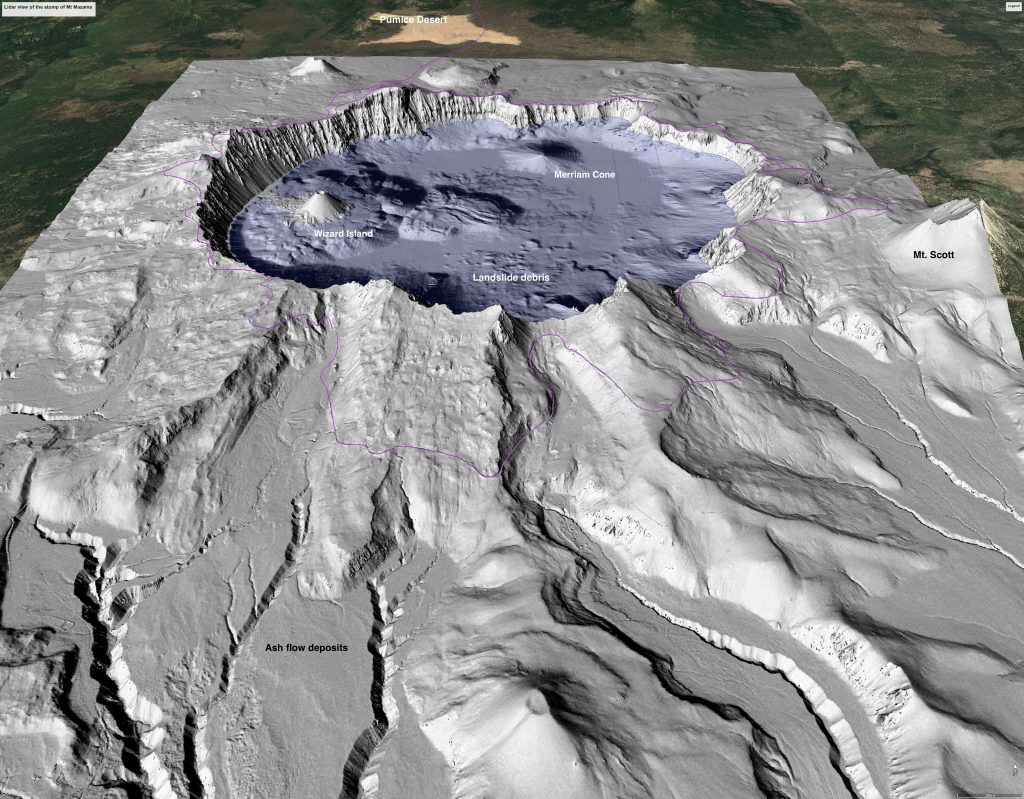 Figure 3: This lidar image looks north across the stump of Mt. Mazama and Crater Lake and the route around it. Part of the reason for the many ups and downs along the ride is that the original mountain had several large glaciers on it. In this image you can clearly see three large “U” shaped valleys along the southern rim. The lower parts of these valleys were filled with the glowing avalanche deposits and have flat wide floors. The steep sharp edged gullies have been eroded into the relatively soft fresh tuff in the last 7,700 years. The bottom of the lake is very flat in many parts, but the Merriam Cone and Wizard Island volcano rise above it. The rough appearance of the lake bottom along the south shore marks the location of a giant landslide from the slopes of the Crater.

So much magma erupted that the mountain collapsed into the empty magma chamber, leaving a hole nearly 4,000 feet deep. In the years that followed, eruptions from the floor built two small volcanos, Wizard Island and Merriam Cone (Figure 3 and 4). The Wizard Island volcano was actively growing as the lake was filling, with the final eruption occurring when the lake was nearly at its current level. Merriam Cone was built entirely beneath the deep dark water of the nearly 2,000-foot-deep lake. 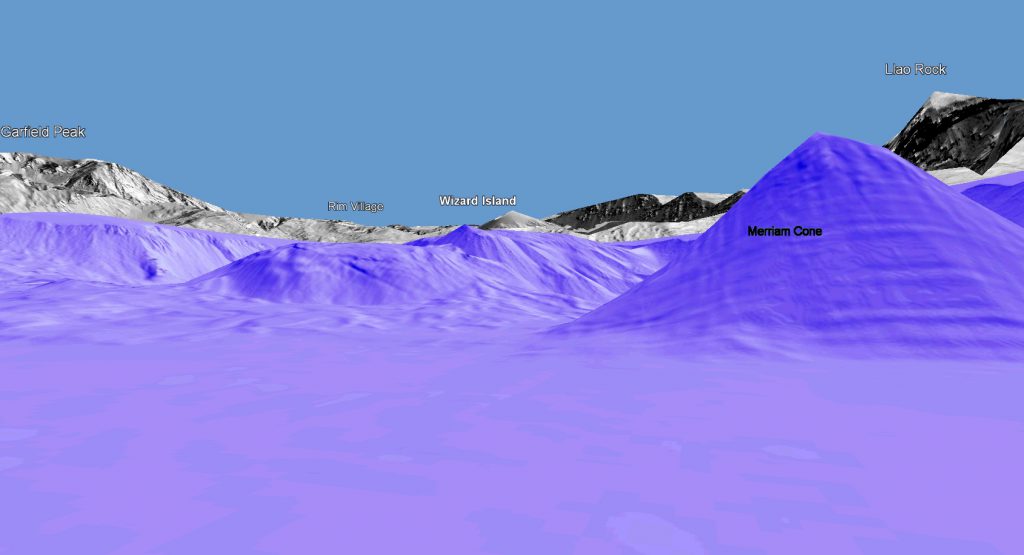 Figure 4 A trout’s eye view, from near Cleetwood Cove and a depth of 1800 feet.

We start on a long straight and gentle ascent, which will eventually bring us to the Pumice Desert. The eruption column was located at the north end of the volcano, and much of the pumice deposits are thick on this side. Despite abundant rain and snowfall, little grows on the Desert after 7,700 years, because the loose pumice drains easily therefore surface layers don’t hold enough water to support vegetation. The initial climb ends with the reward of your first view into the crater and the incredibly blue waters of the lake. The lake has filled largely with rain and snow that fall directly into it, rather than water that has run across the landscape, so it is very pure. The lack of nutrients and fine sediment in the water makes for incredible clarity, and gives it its distinctive cobalt blue color.

There are too many cool geologic features on the Rim Drive to cover in this space, and there is tons of interpretive material available online. I suggest you look at: