Ian Madin has worked as a geologist with the Oregon Department of Geology and Mineral Industries for nearly 30 years. In his spare time he enjoys riding with Cycle Oregon and sharing stories about the incredibly cool geology of Oregon. We are delighted to continue this popular series, beginning with an overview of  the region here, and will be following up with full reports for each individual day of Classic over the next few months. Please stay tuned!

The 2020 Cycle Oregon Classic ride traverses one of the most geologically diverse and colorful parts of Oregon and although the valleys, hills and cliffs we will pass seem to be endlessly varied, we will be mainly passing just two geologic landscapes.  If you had arrived in this area 15 million years ago, you would have seen an endless plain of fresh lava, the result of dozens of monumental eruptions of the Columbia River basalt, but buried beneath those hundreds of feet of dense black rock was an earlier landscape, one that had been in place from the end of the era of the dinosaurs. Geologists call this kind of abrupt transition of rock types and geologic environments an unconformity, because the rocks above do not conform to previous layers. Since the basalt eruptions ceased, a new landscape has been forming as erosion eats through the armor of basalt to expose the older world beneath.  Our ride will take us back and forth between these two worlds, across the unconformity. 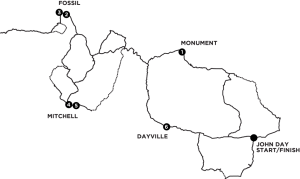 For most of the ride we will be seeing either the Columbia River basalt, with its characteristic cliffs of dark rock, or the older John Day and Clarno formations which are a mixture of lava flows, lake sediments, and volcanic ash that were deposited on land.  Most sedimentary rocks that preserve fossils are deposited in the ocean, rather than on land, because the land surface is usually in a state of constant erosion and change. As a result, fossil deposits from the land are rare and there are usually large gaps in time between them. The John Day formation is very unusual because it contains a continuous record of land animals spanning most of the age of mammals, starting shortly after great extinction of the dinosaurs 76 million years ago and extending to the eruption of the Columbia River basalt 16 million years ago.  The ash layers in the John Day rocks can be precisely dated using radioactive decay analysis, so it is possible to develop a continuous history of the evolution of many important groups of mammals.

When the Columbia River basalt lava flows began to pour out of giant fissures in the earth along the Oregon-Idaho-Washington border, they encountered a varied landscape eroded into the John Day rocks, with mountains and deep canyons.  The early flows filled in the canyons and valleys, and as the flows continued for thousand of years, the older landscape was completely buried. Erosion since the end of the eruptions has carved new canyons through the basalt and exposed the John Day rocks beneath.

Although these two types of rock make up most of the route, we will also see even more ancient rocks of exotic terranes transported here by plate tectonics, sandstone and cemented gravel from the oceans at the time of the dinosaurs, and the remnants of an enormous volcanic explosion that covered half of eastern Oregon with glowing ash. The landscape is still active and we will pass by huge landslides and active earthquake faults.

Buckle on your helmets, we are in for some wild geology! 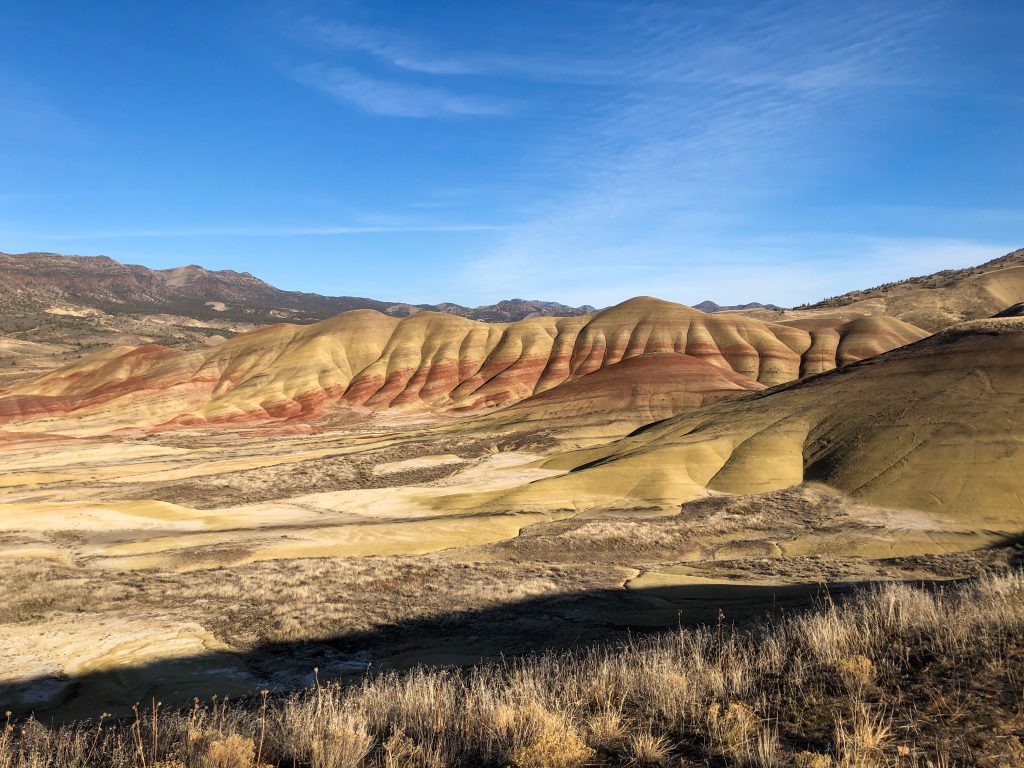 For a good overview of Oregon geology with a presentation intended for the general public, see the companion website to the 2009 Geologic Map of Oregon.

High resolution Lidar topography is available for much of our route. Lidar data is collected by flying a super accurate laser rangefinder in a precisely navigated airplane to produce topographic maps that see features a few feet across. Much of the 2020 route was recently flown, and you can view the data at the Oregon Department of Geology and Mineral Industries Lidar website.

For an introduction to the rich fossil record of the area, visit the National Park Service’s Fossil website.

To learn more about local opportunities and the great interpretive center in the town of Fossil, visit the Oregon Paleo Lands Institute website.