Our weekly round-up of interesting bike news, commentary, and the best of what our favorite riders are up to.

Opening Up by Closing Streets – While recent traffic-calming efforts in cities across Oregon aren’t actual street closures they are important measures being taken to ensure that communities have the space they need to recreate outdoors and to travel safely by foot and bike. The Portland Bureau of Transportation has announced and begun installing 100 locations of “Slow Streets Safe Streets” as part of a traffic calming initiative that would allow people more space to be outside under current shelter in place protocols. The City of Bend instituted a Stay Healthy Streets initiative on April 21st that also reduced through-traffic and slows traffic in neighborhoods throughout the city. It’s important to note that neither of these initiatives have closed streets to traffic as local traffic, emergency, delivery, and sanitation vehicles may still pass through. Though just to the north, Seattle has announced a plan to make 20 miles of their current traffic calming system permanent by closing streets to vehicle traffic for good.

What to know about Oregon’s outdoors right now – Cycle Oregon Champion Sponsor Travel Oregon has a comprehensive web page with up-to-date information on how to best enjoy outdoor recreation in conjunction with Governor Kate Brown’s most recent details on re-opening the state. Looks like a great weekend ahead and we encourage getting outside but please PREPARE before you go & Take CARE when you get there. 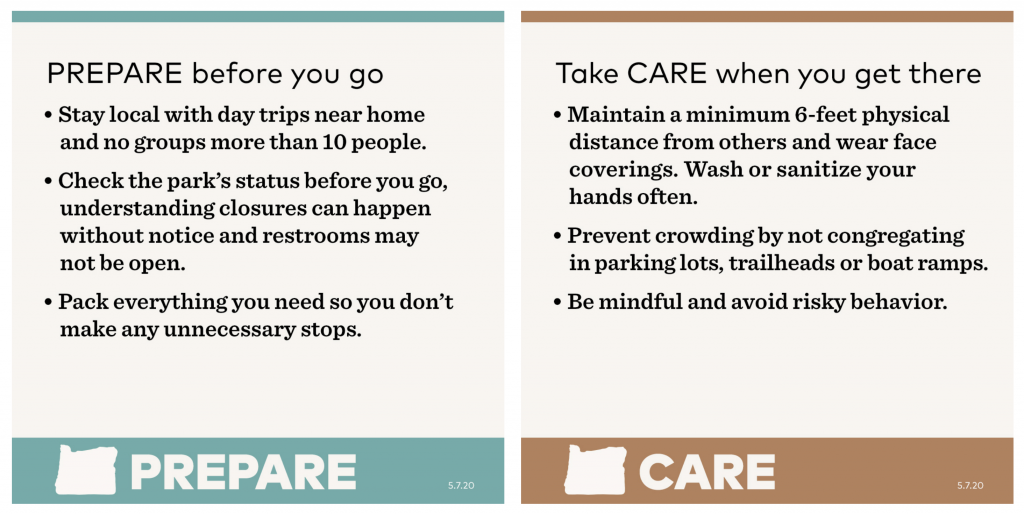 Coffee Talk – You’ve enjoyed a cup or two (probably a lot more!) of delicious Nossa Familia coffee at our events over the years; they are Oregon’s first Certified B Corp coffee roaster and ardent bike advocates. Company founder Augusto Carniero pours his heart into Oregon cycling as deeply as the coffee from his family farm. He appeared on OPB’s Think Out Loud radio program recently to discuss the future of Oregon’s restaurant and cafe business. You can listen to that program here.

Bike Heroes – A 7-year-old boy was recently injured in a bike crash in a tumble down the Blue River Dam in Lane County, Oregon. His mother was also injured while rushing to his aid after the crash and both were taken for medical care right away. But what about the bikes? Chief Christiana Plews and her crew from the Upper McKenzie Rural Fire Protection District should, of course, be commended for how quickly they came to the aid of this family in distress but what they did next serves to heal us all. The fire crew pooled their own money to buy the boy and his younger sister new bikes (and helmets) along with flowers for mom. The bikes were delivered with sirens blaring and lights flashing as part of a scheduled driver training. Lt. Samantha Winnibgham organized the event and put it best, “No little boy should go without a bike!”