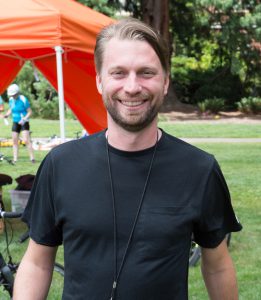 Over the past four years, Chris Knott has been communing with volunteers, wrangling riders, answering emails and taking calls for Cycle Oregon. According to Chris, ”It’s been an incredible mix of challenge and reward.” He recalls his first WEEKENDER event in 2014 as an initially terrifying experience, “It was about an hour before check-in and it truly hit me that 2,200 people were about to show up with questions about the route, dorms, menu – everything. I didn’t know how I was going to handle it.” That initial thought was turned on its head when people began arriving, “I realized that I had the support of a great team and some fantastic volunteers. They really helped me through that first event.” Not only that, Chris said rider’s passion for the organization shone through – they were patient, good natured and excited!

It’s a bold statement, but Chris says that his time at Cycle Oregon has strengthened his understanding of humanity. To see people overcome cancer and ride across the state a year later, to drag a trailer 70 miles so a child can experience the road by bike, to watch someone smile as they reach a summit or get out and ride 50 miles for the first time in their life just to try it – those are the inspiring memories he’ll take with him.

Even the rough times were good life experience. “I remember a guy on my first week ride laid into me about a situation I had no control over. Later that night the rider ran hurriedly toward me and I was expecting the worst. As he made his approach, the rider offered up a beer and said, “I just want you to know I was not myself earlier. I was tired and hungry, but I am actually a really nice person.” Sometimes people just need a snack to make a new friend.

But all the planning, excitement, fun and controlled chaos that is Cycle Oregon is coming to an end for Chris. Over the summer, he and his wife Alissa decided that they couldn’t pass up a chance to move to Europe. They are moving to southern Germany (and their little dog too) where she’ll be working for the government. Chris is looking for new opportunities there but is certain that his time at Cycle Oregon has prepared him for anything that may come his way.

He would like to heartily thank the riders, volunteers, staff and all the other wonderful people he met along the way. Perhaps it’s fitting that his term ended after four years.  For him it wasn’t just a job, “it was like being the mayor of this little traveling city.”

Fear not, as Chris has been working with his replacement over the last month to get her up to speed on Cycle Oregon and our community. Miranda Wigginton comes to us most recently from The Oregon Children’s Theatre where she worked with customers and volunteers as their box office manager, and the Bridgetown Comedy Festival where she served as the volunteer manager and producer. Help us welcome Miranda! She can be reached at miranda@cycleoregon.com.

We’ll miss Chris, but wish he and his wife nothing but the best on their new adventure!