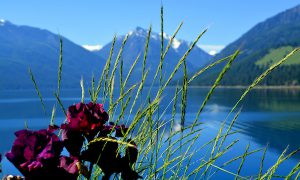 The Wallowa Lake Highway goes through the community of Enterprise, Oregon then six miles later through Joseph, Oregon on its way to the glimmering shores and crystal clear waters of Wallowa Lake. A little ways past the lake, the road ends and the wild, rugged beauty of the Eagle Cap Wilderness and its 534 miles of trails begin.

If you head just 3 miles north of Joseph, you’ll find a 33,000-acre (51 square miles) grassland known as the Zumwalt Prairie. One of the largest in North America that is still intact, this one-time grazing land of the Nez Perce is now home to a 36,000-acre nature preserve where you can find soaring raptors, diverse wildlife and over 100 species of wildflowers.

We’re making a point to mention the Eagle Cap Wilderness and the Zumwalt Prairie first because they are both unique and magnificent in their own right, but once we get to talking about the breathtaking 9,839-foot mountains that form a 40-mile horseshoe around this area, other points of interest tend to fade into the background.

The ancestral home of Chief Joseph and the Nez Perce tribe, the Wallowa Valley has gone through an agricultural period, then a timber phase, and then eventually bronze foundries took over as the industry du jour. Today, Joseph has earned a reputation as an art town. A stroll through the downtown Joseph Artwalk leads visitors past a series of life-sized bronze sculptures. At the center of the art scene here is the Valley Bronze foundry and gallery, one of the nation’s most notable bronze foundries. 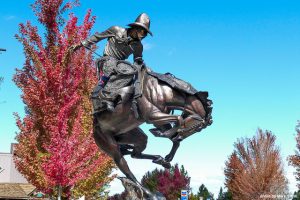 The most undeniable attraction to this part of the state however, has to be the landscape. The dramatic Wallowa mountains jutting up directly from the lush, green farmlands leaves many a visitor thinking they took a wrong turn in Hells Canyon and stumbled into the Swiss Alps somehow. Nestled at the base of these mountains, reflecting back the mountain’s handsomely rugged topography against sapphire blue skies, is Wallowa Lake. This extremely photogenic lake is located within its own state park and this year Cycle Oregon riders participating in the Classic will be lucky enough to camp on its shores. Wallowa Lake State Park is great for boating, swimming, fishing or just paddling around, but if the views from the ground aren’t spectacular enough for you, the Wallowa Lake Tramway ascends 3,700 feet above the lake to the summit of Mount Howard. This tramway holds the distinction of being the steepest tram in North America. Once you’re at the top you can grab a bite to eat at the Summit Grill – where the special of the day is always the view. 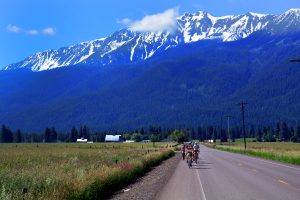 It seems like a given that the most popular activities in the Wallowa Valley involve enjoying the outdoors in this amazing setting. Cyclists are drawn here for the many great bike rides including the Grand Tour, one of Oregon’s Scenic Bikeways that gives riders unbeatable views of the Wallowa Mountains, the Elkhorn Mountains and the Eagle Cap Wilderness. Rafters and anglers come from all over to test their luck and their skill in the Snake, the Grande Ronde or the Salmon Rivers. And hikers and campers have miles upon miles of pristine wilderness playground to explore.

All this communing with nature can work up a big appetite, but not to worry, the food here is enough to make even the most discerning foodie tweet their approval. There’s great coffee at Red Horse Coffee Traders in downtown Joseph, great pizza, beer and live music just down the street at Embers Brewhouse, and Terminal Gravity in Enterprise brews some outstanding local beer from the “middle of nowhere, center of the universe”. 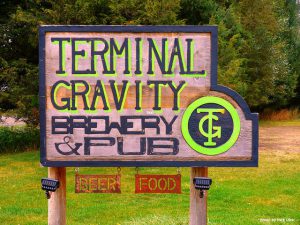 Small towns just don’t feel like small towns without local traditions and the Wallowa Valley has a couple of great ones. If you end up in “Little Switzerland” towards the end of September, you’ll get to experience their annual Alpenfest complete with all the yodeling, Bavarian-style beer and alphorn playing you can handle. And every year during the last full weekend of July, the Chief Joseph Days Rodeo is in town with four days of rodeo and six days of parades and western activities.

No matter what draws visitors to Enterprise, Jospeh and Wallowa Lake State Park, they never leave disappointed – that is, if they can bring themselves to leave at all.