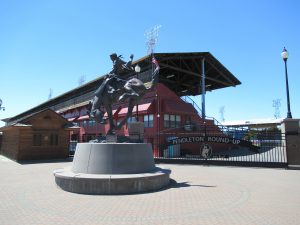 Pendleton, Oregon is about as western as it gets. If this city were a person it would wear a Stetson hat and walk with a bowlegged swagger. Between its rowdy history and its lively present, Pendleton has plenty to offer anyone with a hankerin’ to mosey around a really interesting town for a few days.

Straddling the Umatilla River, flanked to the southeast by the foothills of the Blue Mountains and sharing its eastern border with the Confederated (Umatilla, Cayuse and Walla Walla) Tribes, Pendleton started out as a farming and ranching community. Due to its relatively remote location and its industrious, self-sufficient populus, Pendleton has always made stuff. Famous for its maker culture before maker culture was even a thing, Pendleton is and always has been world-class when it comes to crafting goods. Perhaps the most recognizable name to come from this area is Pendleton Woolen Mills (1863). Originally making blankets to trade with the nearby Native Americans, Pendleton has become synonymous with high quality, bright colors and intricate designs. 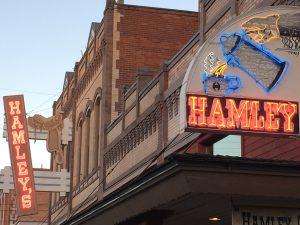 Another local favorite is Hamley & Co. Since 1905 they have been handcrafting “the finest saddles money can buy” and over the years they have provided over eighty Round-Up trophy saddles. Many world champions have ridden Hamley saddles and many still do. After being purchased by a pair of ranchers in 2005 keen on resurrecting the brand, Hamleys expanded their repertoire to include the steak business. If you’re in the mood for a great steak or a drink at one of the most beautiful bars you’ll ever lay eyes on, check out Hamley’s Steakhouse downtown.

But you really can’t talk about Pendleton without talking about their world-famous rodeo. The first Pendleton Round-Up in 1910 was to be “a frontier exhibition of picturesque pastimes, Indian and military spectacles, cowboy racing and bronco busting for the championship of the Northwest.” It turned out to be that and so much more. Every September after the farmers have put up their harvest, the Round-Up returns and the population of the town quadruples. More than just an annual event, the Round-Up has become an institution and for more than a century it has only ever missed two years (due to World War II). The allure of bucking broncs and bulls, the Happy Canyon Indian Pageant, Indian Pow-Wows, WestwardHo! Parade, and live concerts is undeniable and this year Cycle Oregon will be in town for the festivities! 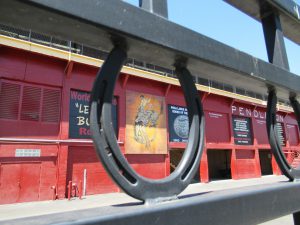 If you’re looking for another perspective on Pendleton, look no further than the large Native American and Chinese populations that have played significant roles in the heritage of the town.

The Confederated Tribes of the Umatilla Indian Reservation is just ten minutes east of town. Here you can find the grounds of the Wildhorse Resort and Casino which houses the Tamastslikt Cultural Institute. This is the only museum located along the Oregon Trail that explores how settlers forever changed the lives of the tribes here. The exhibits celebrate the history and the traditions of Cayuse, Umatilla and Walla Wallla Tribes who have lived here for more than 10,000 years.

It may be hard to imagine now but Pendleton used to have a thriving Chinatown. During the late 19th and early 20th centuries, many Chinese laborers working for the railroads called Pendleton home. In order to avoid discrimination from the town’s white population, the Chinese built a series of tunnels under the streets of the city. This subterranean collection of pathways and businesses, both legal and illegal, is known as the Pendleton underground and you can tour it today! All you need is an hour and half, fifteen bucks and a reservation.

From cowboys to craftsmen, Native Americans to historyophiles, Pendleton has seemingly endless options to give visitors a taste of the “true west”.